This time last week I was walking through the Civil Rights Institute in Birmingham, Alabama. I was there to see one of my best friends and was fortunate to be able to travel with another friend, Steph, for a girls’ weekend. While Birmingham would not have been my first choice of travel (I delayed going for over a year) I was pleasantly surprised by a lot of what I saw while there.

We began our girls’ weekend with a late flight into Bham on Thursday with no issues and made plans for our weekend adventures. Our first stop Friday morning was Magic Muffins for breakfast: we got cheddar and ham biscuits, chicken salad orzo, and a blueberry scone. The cookies looked delicious, but it was slightly too early for dessert (I know, I know, what am I saying?) Full bellies and puppies eager to move, we made our way to Red Mountain, a local park which used to be a mining area. There were tons of walking trails which led to old mining areas, old mining homes, activity areas, and beautiful views of the surrounding area. While none of the trails are very long, we walked about 5 miles total and found gorgeous and relaxing areas. At one point on the trails, there were t

wo sets of large wooden chairs; we had fun at those.

After working up a decent appetite, you know me, we made our way to Saws, the best BBQ i town. While it was delicious, it still did not compare to NC BBQ (even though the owner and chef is from NC). We continued walking around the quaint area by Saws, heading into an antique novelty store and finally ending up with ice cream.

I got the coffee supreme, no surprise there, but it was one of the best versions of coffee ice cream I’ve ever had. Well done Bham. After resting at home and the girls finishing up homework and work, we headed back out for dinner. I’m sure you’ve noticed a trend here… I love food. We decided on Mexican – Cocina Superior but not before drinks and appetizers at Brio. I had a red sangria which was strong and on point- thanks Ethan, and a shrimp app which was also great. Our night ended with Finding Dory, popcorn, and more drinks back home.

Saturday was rainy, but that did not deter us. Katie’s hubby made us breakfast (thanks!) and we headed to a popular farmers’ market downtown, Pepper Place- it used to be a Dr Pepper bottling facility but has since been renovated and re-outfitted to serve the community through local vendors. As we made our way around the booths we decided to do a home cooked meal with items from local vendors for dinner- more on that later. We then headed to the Civil Rights Institute and spent quite a bit of time there. I really appreciated the effort that went into recording and displaying such important history for people to see. The Civil Rights Movement was incredibly important, and even though we are still going through it, walking through the displays and memorials was very powerful to me. I was saddened and angry, but I also left hopeful and empowered by the actions of a few that turned into a movement that changed America. I was constantly comparing the NODAPL movement and many other movements to what I saw in the videos, pictures, and text. I could spend a lot of time writing about my feelings and what I thought and experienced, but it would take a long time- so I’ll just leave this picture to talk for me.

After the emotional experiences at the CRI, we headed up a local mountain (yes they do have those in Birmingham- it’s actually quite hilly) to grab some food at a diner. It had amazing views and I heard Kentucky lost their basketball game, so win win. 🙂 The rest of the day was pretty quite. The girls were tired, so we retired early for dinner and watching football- two of my favorite things! We cooked goat, roasted veggies, and had soup all from local vendors and it was very tasty. We ended our evening with some card and board games and made our way to bed. 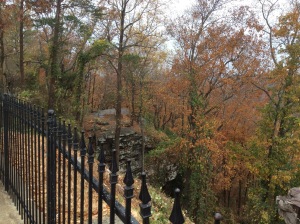 Sunday morning, with only a few hours before our flight, we headed to Another Broken Egg for brunch and another great meal- try the cinnamon roll shared plate 🙂 Afterwards we made our way to 5 Points to see the demonic fountain which ironically is in front of a Methodist church;

I had a few good laughs over that, and then drove by Sloss Furnaces before heading to the airport. It was a quick weekend, but it was so great to see my friends and hang out with two of my favorite people. Plus I really enjoyed Birmingham so don’t write it off if you’re ever considering Alabama. Girls’ weekends are good for the soul.